For thirty days before 08 November 2016, I posted a link on social media to the video tape of the now-president-elect mocking a disabled reporter.  Last night, Meryl Streep killed her Golden Globe speech before a packed house and an adoring nation by condemning Trump for his sickening conduct.

The president-elect responded by calling Streep “an over-rated actress” and denying that his contorted arms and exaggerated grimace had been intended as mockery of the reporter’s disability.

75,000,000 Americans and the rest of the world know that Trump meant not only to mock that reporter’s disability but to imply that his impairment prevented accurate recall and perception.  Believe me, I instantly understood DT’s intent. I don’t have to be a mind-reader, as he implied last night.  I walked the streets of Jennings, Missouri as a handicapped child in a family with no car.  Boys from my parish would linger twenty feet behind me, flailing their arms and stuttering through contorted faces, their legs criss-crossed as they staggered forward.

I recognized those boys in Trump’s performance.  Like Meryl Streep, I flinched as his act pierced my heart.  I played the video of Trump mocking that reporter over and over, a growing fear spreading its chill through my veins.  Surely no one of any intelligence or compassion would think this guy has the maturity and character to assume the highest office in our nation?

Yet 64,000,000 people did.  I find myself riding in elevators glancing nervously to my left and right, worried that I am surrounded by people who think making fun of us disabled persons doesn’t signify a bully-mentality.

And lest you mistake Trump’s revisionist account of his performance for anything but devious malarkey, please read this article on gas-lighting.

I didn’t see Meryl Streep’s speech live because I had house-guests.  After the last one left and I had finished loading the dishwasher, I climbed the stairs to my bedroom.  I thanked God that I can still do that, since my lovely upstairs sanctuary with its 100-year old pine-clad walls and cathedral ceiling lured me into buying this house in the first place.  I moved around the room, taking off jewelry, finding something soft to ease over my swollen joints, watching a recorded Food Network show with the sound off.  Finally, I laid down and scrolled through Facebook, discovering that no less than five of my friends had tagged me in a repost of the Streep speech.

My tribe.  How well they understand my outrage at anyone who disparages those of us with disabilities, from the woman who parks in the handicapped space without plates or placard because she’s “just going to be inside for five minutes” to the presidential candidate who contorts his body to get a laugh from the fans whom he has deluded into think he and he alone can make America great.

The man who defends himself yet again by levying a completely baseless ad hominen attack on she who bravely stood and pointed dead-on at the Emperor’s naked body.

I’ve got news for Donald Trump.  America has always been great — not because of you, but in spite of you and your kind.  Americans rise above people like you, despite our crippled legs.  We succeed, despite the fact that we learned English as a second language.  We persevere, and we survive, and we will survive your four years too.  We will stand together, in our cities, and our neighborhoods; our tenements and our townhouses — disabled and able-bodied; native-born and immigrant; young and old; gay,  straight, trans-gender and gender-fluid; black, white, Hispanic and Asian.

And if we need to stand together to protect ourselves from our own president, we will do that too.

We know, for sure, that we can count on Hollywood to stand with us. 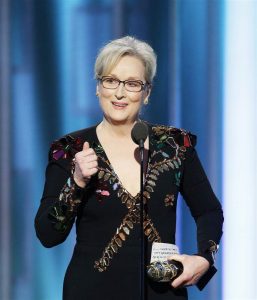 If you enjoy this blog, please tell your friends about it. Thank you.
9
SHARES
ShareTweet