Yesterday’s news disturbed me in so many ways that my brain had trouble wrapping itself around both the “alternative facts” being fed to the American people and my emotional reaction to them.  I logged into the internet numerous times, scrolling through the wire services for accounts of the actions of the newly-elected, just-assumed-office, president of my country.  Reuters provides the most clean account of American comings-and-goings; the New York Times also can be a reliable source of information, along with the Wall Street Journal to which I don’t subscribe, and a few other sites.

Each of them told the same story.  Trump lies, his people provide alternative facts, and the dismantling of the grand experiment has begun.

Witness this while it’s still legal to do so:

“The U.S. Department of Agriculture said on Tuesday that an internal email sent to staff at its Agricultural Research Service unit this week calling for a suspension of “public-facing documents,” including news releases and photos, was flawed and that new guidance has been sent out to replace it.

“The ARS focuses on scientific research into the main issues facing agriculture, including long-term climate change. President Donald Trump has cast doubt on whether man-made climate change is real and has railed against ex-President Barack Obama’s efforts to combat it.

“The original email, sent Jan. 23, said: “Starting immediately and until further notice, ARS will not release any public-facing documents. This includes, but is not limited to, news releases, photos, fact sheets, news feeds, and social media content.”

Our nation and the world face serious, scientifically documented climate changes.  If we cannot share scientific information and if the citizens can no longer be privy to it, how will we develop methodologies, policies, and practices to combat it?  So:  Explain the “original e-mail” directing the black-out?  Who sent this “flawed” missive?  Who ordered it?  Bravo to the USDA for trying to mitigate its damage, and bravo to the Badlands for their defiance.

Underlying the specific issue of climate change, a broader concern overwhelms me and has my ulcer in high gear.  The newly-elected, recently-inaugurated president Trump has let no grass grow under his feet in assuming the mantle of tyrannical dictator.  The first move of an autocrat is to take control of information, cutting off all sources except known and trusted spokespersons and decreeing what will be announced.  Alternative facts.

I might disagree with Republican values.  I might believe that we should promote marriage equality, combat global warming, and that immigration reform should focus on allowing refugees rather than repelling them.  But I may disagree.  We may dialogue.  The dialogue takes place in a democratic society.  In order to engage in those discussions, we must know the truth, not alternative facts controlled by a central source with its own agenda of self-promotion and power.  We must know the entire truth, not the trickle of fractured fairy tales spun by the administration’s personal propaganda machine.

In the single one-on-one conversation in which I engaged with a Trump supporter before the election, the Trump supporter told me, “He’s not like the media paints him out to be.”  I demurred then, citing Trump’s disregard of women, mockery of a disabled reporter, and absolutely insane proclivity to wage war via Twitter on those who disagree with him.  The Trump supporter simply replied, “If you knew him, you would know he’s not as bad as you think.”

I expect the Feds to coming knocking on my door any minute, since we’ve seen that anyone who dissents will be punished.  My home could be threatened, my meager savings diminished or simply appropriated, my law license stripped, and my character assassinated.  Perhaps I’m too small fry for notice.  Either way, I’ll keep watching.  I’ll keep writing.

I no longer think it will do much good, but I will continue if for no other reason than to chronicle the beginning of the end. 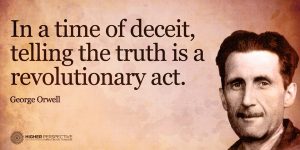 4 thoughts on “And so it begins”