Of all the sickening things that have astounded and unnerved me since the election of Donald Trump as the 45th president of the United States of America, among the top five has to be the resurgence of hate crimes.  In fact, the incidence of viciousness arising from bigotry has accelerated to the point at which The New York Times now has a column entitled, “This Week In Hate”.

“2016 was an unprecedented year for hate,” said Mark Potok, senior fellow and editor of the Intelligence Report. “The country saw a resurgence of white nationalism that imperils the racial progress we’ve made, along with the rise of a president whose policies reflect the values of white nationalists. In Steve Bannon, these extremists think they finally have an ally who has the president’s ear.”

Law enforcement around the country reported a rise in hate crimes since the election, including the New York City Police Department, which announced a 115% increase in a statement on 05 December 2016.  More recently, Jewish cemeteries in Missouri, Brooklyn, and Philadelphia have been vandalized in ways indicating hate-driven perpetrators.

As a white middle-class female, I’ve been on the edge of discrimination but not the direct victim of it.  A restaurant refused service to a black friend and myself in 1980.  Someone told my son that he was “too white for this school” when he started ninth grade. Twenty years ago, a woman accosted me in a shopping center demanding to know where I’d stolen my niece, an adopted African-American toddler.  But I cannot say that I truly have felt the fear and anguish which racial and religious discrimination levy on those whose skin color, cultural heritage, or religion cause the kind of hatred that led to the murder in Olathe last month, or the toppling of headstones in University City.

The political atmosphere which validates this hatred permeated the presidential campaign.  Whether Donald Trump himself endorses bigotry or just took advantage of the closeted hatred to ride its terrible wings to Washington does not matter.  The climate of our country allows the unleashing of hatred.  Unless Trump condemns both the violence and the beliefs which its perpetrators use as justification, the haters will accelerate.  Feeble protest will feed their fire.  The burning will destroy the fabric of America.

A friend recently suggested that the hatred could not prevail as long as “people like us” protest its fury.  I do not agree.  The voice of middle-class America will not silence the spectre of evil.  Only those who summoned this demon can send it back to hell.

Trump must speak, and he must speak with vehemence.  His cabinet must join him with a unified voice.   Congress must proclaim that America will not tolerate bigotry.  Until Washington insists that hatred has no place in our society, this boil will continue to fester.

The rest of us should also speak.  But our leaders must be first and loudest.  If they do not give voice to a strong and unequivocal condemnation of this rise in hate crimes and the disease which propels the madness, then the voice which they must hear should be ours:  Loud, clear, and unrelenting, in solidarity with those whom the haters continue to defile.  We will not tolerate this abuse.  And we will not tolerate anyone who stands silent while the haters rampage. 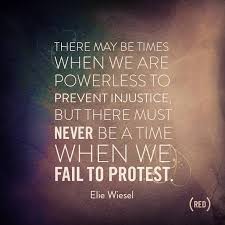