Lately the thought of little children being injured, sick, and hungry has troubled me.

I saw the picture of a five-year-old handcuffed after the first executive order banning people from certain countries from entering the U.S.  I enlarged that picture and studied it, trying to understand why that child posed such a threat that handcuffs became necessary.

I’ve seen the haunting photographs of children dead on beaches after their families fled war-torn nations, desperate for some comfort in other lands.

News article after news article scrolls by, showing tiny emaciated bodies in the laps of medical staff.  My heart clenches.

I don’t watch a lot of television but the shows that I like are mostly on the Food Network.  That channel seems obsessed with funding “No Kid Hungry”.  Then I read about the current administration trying to pass legislation which among other insanities, will cancel the federal school breakfast and lunch program.  My stomach aches just thinking about the thousands upon thousands of children whose families cannot feed them, who now depend on schools across America for basic nutrition.

Then I see the absolutely astounding dollar figures for protecting our current president’s wife who chooses to remain in New York City; and for transporting him on his numerous golf excursions just in his first five weeks in office.  Estimates vary, but everything that I’ve read suggests that the cost to “protect” Trump and his family   will far exceed that of the prior administration., in part because of the split residence and in part because of the extravagant trips to Florida.

I return to the No Kid Hungry page and read that one in five American children has inadequate nutrition.

What happened to our national priorities?

How can we accept this?

Why do we allow this?

When did we become so splintered or selfish that we tolerate the lavish lifestyle of our leaders and ignore the heart-breaking poverty of 1/5th of our children?

And why do we have to depend on a television network’s hourly entreaties for Americans to send money to help feed the hungry mouths in homes across this country?

Or is it the leaders who wear blinders and forge ahead in their golden carriages while the rest of us parse out ourmeager net incomes to help those less fortunate even than we?

I’m not a Christian but my parents raised us in the Roman Catholic Church.  Over and over as a parochial grade-schooler, I heard the story of Jesus Christ admonishing the church elders, “Let the little children come unto me and do not hinder them, for such is the kingdom of my father.” (Mathew 19:14).    Every religion has similar teachings.  Judaism teaches involvement and concern with the plight of fellow human beings. Every life is sacred, and we are obligated to do what we can to help others. The Torah states, “Thou shalt not stand idly by the blood of thy brother” (Lev. 19:16).  The Koran admonishes:  “Give to the near of kin his due, and also to the needy and the wayfarers. Do not squander your wealth wastefully; for those who squander wastefully are Satan’s brothers, and Satan is ever ungrateful to his Lord.”   (17:26 – 27).

I could continue, citing chapter in verse in every religion developed on this planet.  These values make their way into our religions because they underpin our existence.  They used to fuel our government’s decision-making.  Now we slice programs intended to serve these values in favor of spending millions to protect  the president when he golfs or his wife in her golden tower.  Every president has required such details, but they seem to be escalating while programs to serve the poor fall under a cruel surgeon’s knife.

What monster have we created?  And how can we save ourselves from its thunderous wrath and stumbling, senseless, uncaring destruction?

Ask these questions.  Ask them again and again.  Ask boldly and relentlessly.  Keep asking until your voice reaches Washington, and do not stop until the  answer resounds; until our government again proclaims its commitment to all of America.   Do not stop until the answer rings like the bell of Liberty across our nation:  From sea to shining sea. 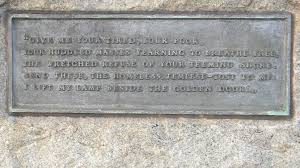 If you enjoy this blog, please tell your friends about it. Thank you.
4
SHARES
ShareTweet

One thought on “Let the little children come unto. . .”