The scowl on #45’s face topped a caption proclaiming that he had declared war on the filibuster rule.  Our current president now wants the Senate to suspend the requirement of 61 votes to pass legislation.  We have gotten to 30 May 2017, more than 100 days into the current administration.  The stench of desperation hangs in the dank summer air.

I remembered the recent bestowing of an honorary law degree on Trump, and contrasted that with the actual Juris Doctor possessed by Barack Obama.  My mind naturally began comparing the two, driving me to the internet to recall just how well Obama’s first 100 days had gone.

At Wikipedia, I read the litany:

“Obama began to formally create his presidential footprint during his first 100 days.[1] Obama quickly began attempting to foster support for his economic stimulus package, American Recovery and Reinvestment Act of 2009.[2] The bill passed in the House on January 28, 2009, by a 244–188 vote,[3] and it passed in the Senate on February 10 by a 61–37 margin.[4][5]

Obama’s accomplishments During the first 100 days included signing the Lilly Ledbetter Fair Pay Act of 2009 relaxing the statute of limitations for equal-pay lawsuits;[7] signing into law the expanded State Children’s Health Insurance Program (S-CHIP), which the White House said provided benefits to 4 million additional working families; winning approval of a congressional budget resolution that put Congress on record as dedicated to dealing with major health care reform legislation in 2009; implementing new ethics guidelines designed to significantly curtail the influence of lobbyists on the executive branch; breaking from the Bush administration on a number of policy fronts, except for Iraq, in which he followed through on Bush’s Iraq withdrawal of U.S. troops;[8] supporting the UN declaration on sexual orientation and gender identity; and lifting the 7½-year ban on federal funding for embryonic stem cell research.[9] He also ordered the closure of the Guantanamo Bay detention camp, in Cuba, though it remains open, as well as lifted some travel and money restrictions to the island.[8]

A little butterfly beat its wings against my ribcage as I ran the related search for #45.  Other than signing a slew of executive orders, of which the most pivotal found immediate death at the hands of federal judges, Trump’s only real accomplishment seems to have been returning the Supreme Court to its 5/4 Conservative split.

“Structurally, President Trump had the advantage of a Republican Party majority in the U.S. House of Representatives and the Senate, but was unable to fulfill his major pledges in his first 100 days and had an approval rating of between 40 and 42 percent, “the lowest for any first-term president at this point in his tenure”.[3]”

It’s an unfair comparison in many ways.  Obama’s intellectual abilities sharply contrast with those of Trump.  His ability to reason and articulate; his solid oratorical style; his quiet composure; all give Obama an advantage as a statesman.  Moreover, Trump’s main ability seems to be in the down-and-dirty game of cage-rattling, possibly useful in high stakes business maneuvers but not the stuff of true leadership on a global scale.

I can’t decide whether Trump’s multiple business failures mean anything to his supporters.  I’m hopeless at business myself, but even I would never hire Trump based on his track record.  He principally seems to skate on his masses of inherited money, some of which surely has been lost in bad ventures but much of which must have been busily multiplying.    I’ve heard his supporters call him a smart man, but his limited vocabulary and seeming inability to distinguish between fantasy and reality belie such pronouncements.

My idle speculation leads me to the conclusion that 62,979,636 people looked at Donald Trump’s swagger and envied him.  People tend to elevate those whom they admire to positions which they themselves feel inadequate to fill.  By the same token, when we  feel threatened, as many did under President Obama, we look for something most unlike that which we fear and cling to it for safety.  The lingering nuggets of bigotry; the uncertainty planted by the birther movement; the doubts flowing from the slow, steady improvement in the economy driven by forces that the ordinary citizen couldn’t comprehend; these factors lured 62,979,636 voters into reaching for a sharper, wealthier manifestation of what they thought they saw in the mirror.

We cling to what looks like us, especially if that familiar image seems to have risen to the zenith of success with little effort.

So in many ways, the comparison between Obama and Trump fails from fatal flaws.  Obama stands no chance.  He did what his detractors most resented:  He succeeded, even without white skin, crude talk, or sensational scandals.  How dare he?  In the face of such audacity, the masses fling aside substance and grab at Flat Stanley, who has made his one-dimensional way around the world. 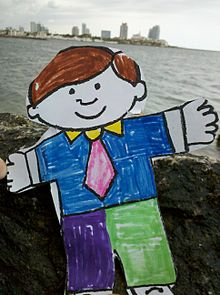 If you enjoy this blog, please tell your friends about it. Thank you.
6
SHARES
ShareTweet