I’ll warn you from the git-go:  I intend to rant.  If you do not want to read a rant, STOP READING.  The subject of my rant?  “Race relations”.

I find it more than outrageous that I still have to use that phrase in 2017.  Twenty-seventeen!  Not Seventeen-seventeen!  Not Nineteen-fifty-seven!  The twenty-first century in what I used to consider the greatest nation on earth, and I have to start a post not only with a “trigger warning” about a rant, but with the phrase “race relations”!!!!!

My rant flows from the recent revelation that a Flint official resigned after being caught  in his bigotry.  I chose these words with deliberation.  He only resigned because someone recorded him.  He did not resign because he is a bigot, but because someone publicized his bigotry.  Make no mistake about the distinction.

As reported within the last twenty hours:

“A Michigan official that manages tax foreclosed homes for the county where Flint sits has resigned after an audio recording of him blaming the city’s water problems on “n—ers (who) don’t pay their bills” surfaced online.

“Phil Stair, who was a sales manager at the Genesee County Land Bank, was recorded using racial slurs by local water activist Chelsea Lyons who later posted the recordings to the website Truth Against the Machine.

“In the recording, Stair is heard saying “Flint has the same problems as Detroit, f–ing n—ers don’t pay their bills, believe me, I deal with them,” he said.”

That bigotry even exists in 2017 sickens me.  That the citizens of Flint suffer at the hands of a bigot nauseates me.  To be honest, that   this issue still exists overwhelms me with exhaustion, and I’m a white, middle-class middle-aged lady in middle-America barely touched by racial bias except by familial affiliation.

If this despicable behavior drives ME to extreme anger, imagine how a person “of color” feels. (God, I hate that phrase too — “of color”.   We’re all ‘of color’, as my son once taught a CASA worker who accused me of being white.  My wonderful then-five-year-old chirped, ‘No she’s not, she’s beige.’)

A year ago or so, someone whom I actually love told me that he was “a little bit racist”.  I said to him then, and I say to him and everyone now:  (a) You cannot be ‘a little bit racist’; and (b) I will no longer tolerate any racial bias.  None.  Nada.  Nothing.  NONE.  I will call you out, and I will take you down.

One can meet a person, interact with him or her, have direct experience, and conclude that their behavior departs from what you find acceptable.  That is not bias.  You’re allowed to choose your associates based upon personal experience and conclusions about individuals.

You are NOT allowed to look at a person’s skin color, or “ethnicity”, and draw conclusions about them based upon their skin color or ethnicity.  Pigmentation does not dictate  worthiness, nor does it drive an assessment of value.  Nowhere.  No how.  No time. Never.  If laws exist which still allow different treatment based upon the hue of a person’s epidermis, those laws repulse me and should repulse everyone.

Hear me now:  Those of us who fit within the definition of “white” started this terrible philosophy of divisiveness based on “color” or “race”.  We caused the need to dialogue about “race relations” by enacting laws which treated Americans differently based upon race.  Those laws arose from our internal choices, that is, the decision that certain humans should be considered superior to others because of their skin color.

While the civil rights movement has pushed us a few inches forward in reversing the path of discrimination, no genuine evolution has occurred because the hearts and minds of bigots resist the change.  Those who have suffered discrimination have worked too long to change it.  They should not be required to change laws which they did not enact and from which they suffer.  Moreover, no one who secretly favors inequality should have any say in the social compact.

I’m aligning myself with those who demand that we stop expecting the victims of our discrimination to cure this evil.   If my refusal to be complicit in the perpetuation of bigotry pushes me into the category of the far left, so be it.  I’m done with pablum.  I’m done with courtesy.  Check your bigotry at the door.  I will no longer make even feeble excuses.  Regardless of your age, your upbringing, or your closeness to me, I will name you:  BIGOT.  I will reject you.

WE RESERVE THE RIGHT TO REFUSE SERVICE TO BIGOTS.

And we will no longer smile when we shut the door in the face of anyone who persists in their bigotry.

We will not hate, but neither will we tolerate. 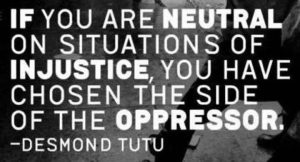 If you enjoy this blog, please tell your friends about it. Thank you.
7
SHARES
ShareTweet