The news about the current president directing the military to stage a parade troubles me.

I have no gripe about pomp and circumstance as a general rule.  In certain times, bringing the nation together with a victorious celebration or a glorious display of patriotism seems appropriate, even useful.  On the Fourth of July, for example; with the mayors and the governors and the local high school marching band, we can stand with hearts on hands and remind ourselves how great our nation has always been, and how much more we have to bind than separate us.

But this parade, this forced, laud-me-now demonstration requested by the president of the United States on the eve of a government shutdown which he himself dismissively invites, feels wrong.  I envision a certain Emperor before whom a small child stands with wondering eyes, proclaiming his nudity.  This parade, as it has been described to us, settles on our country’s bones like an ill-fitting shroud or a heavy hair-shirt.  We wear it to do penance for Trump’s unpopularity, for the agitated debates which block his bidding in Congress.

If our stock market had not taken a crazy downward spiral, perhaps I would not even care.  If the number of homeless veterans had not spiked, I might not notice.  If VA hospitals across the nation did not stagger under the weight of patients left to die from negligence, I would not raise my voice.  But the starving children, the rampant opioid epidemic, the cuts in benefits to our elderly and disabled citizens —  these stark economic realities demand a tightening of the federal belt, not a frivolous squandering of our American coins.

What celebration transcends the rest of us in importance, such that a military parade should siphon funds which could feed, clothe, and cure Americans including our honored soldiers?  We have not won a war, even assuming that such victory would warrant a lavish and costly display.  We have not cured cancer, or ended addiction, or eased the suffering of those who have lost family and friends in any of last  year’s disasters.  Puerto Rico still has no power and Flint’s water still reeks.

I struggle to see the sense of it, but I hold no hope that sense has any influence at Pennsylvania Avenue.   I see no potential that anyone will stop this horrible waste of our strained resources.  Sadly, the only good which might come of this will be if it serves as yet another nail in the coffin of this dying administration.

And that, my fellow Americans, is as sad a commentary on the state of our nation as I ever dreamed of uttering.

God help us all.  God help the United States of America. 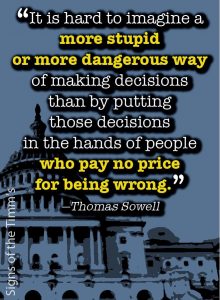 If you enjoy this blog, please tell your friends about it. Thank you.
3
SHARES
ShareTweet