The recent news about Trump fabricating a claim regarding our trade with Canada shouldn’t disturb me as much as it does.  In a month where we’ve heard stories of firings, deaths, bridge collapses, and accusations of insider dealing, another lie by Donald J. Trump shouldn’t upset me.

Think about this:  A man elected by a majority of our electoral college and about 48% of the popular vote went into a meeting with the president of Canada and fabricated a statement.  People whom I know to be intelligent voted for this individual.  Yet he plays fast and loose with the truth.  PolitiFact, a NONPARTISAN website, has found him to be one of the top liars of our day.  Oh, if you support Trump you’ll say that PolitiFact slants its decision-making.  No matter:  The man LIES.  He doesn’t even seem to MIND lying.  He lies as effortlessly as other people drink water.

America used to have a good reputation.  The world considered us to be strong, dependable, and trustworthy.  We would stand behind our allies.  We would bring other people to the bargaining table.  It didn’t seem to matter if we had a few smudges on our face or if our flag showed signs of wear.  The world could rely on us.  We could depend on each other.

Now we can’t even expect our president to know the facts or make accurate statements.  What have we become?  A nation that cares more about guns than children; a country in which the teenagers have to gather in angry crowds to be heard over the sound of rifle-fire.  A place where truth matters less than power.

I don’t mean to suggest that no other politician has lied, or that presidents whom I’ve supported or candidates for whom I’ve voted always told the truth.  I don’t see this as a competition — I see this as a sign of how low we have sunk, that the man whom nearly 49% of our voting population felt deserved the highest elected office in the land walks into a meeting, fabricates facts, and later brags about having done so.

I was outraged at his boasting that he can sexually assault woman because of his position and money.    I recoiled when he mimicked a disabled reporter.  The stunts he has pulled while in office sadden and anger me.  Now this:  He admits to having lied in a meeting with the president of one of our allies.  He seems to think lying is an acceptable way to govern our nation.   He basically shrugged about it.    What is worse, that he didn’t know the truth, or that he doesn’t care if he spoke it?

I no longer want little children to aspire to be president.  Now I want them to strive to be brave and valiant men and women who slay the dragon which has coiled itself in the tower and spews fire on us struggling villagers.  They can do it, with the power of their vote, their willingness to raise their voices, and their resolve to run for office.  The rest of us should do what we can to support the generation which could be our salvation.

I don’t know if America will ever be the same.  But first, we have to clean house, from the top down.  We have to start by speaking the truth:  The 45th president of the United States of America has brought shame to the office which he holds.

He must be stopped — but friends, mark my words:  Mike Pence is worse.

We are in serious trouble.  Tighten your belts and hold onto your hats.  The storm has not yet abated.  Its wind will blow with an unrelenting fierceness before the calm. 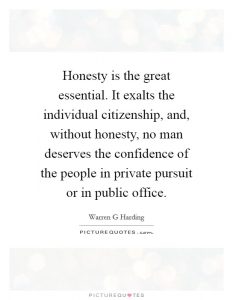