One of the first principles taught to entering law students admonishes that governments cannot legislate morality.  This flows from the inevitable logic that my morality might not coincide with yours.  Therefore, if we let you legislate morality, what about my beliefs?

That’s poppycock, of course.  Congress and our state legislatures enact laws which address principles of value on a daily basis.  Courts construe those laws in a manner which purports to uphold our social compact.  “We hold these truths to be self-evident” starts that process by announcing what our nation supposedly believed, and the foundation of our communal adventure.

I don’t pretend to be a constitutional scholar.  I practiced family law in Missouri for twenty-five years, including about ten years of service to Missouri’s foster children as well as to some of their parents through court appointments.  Prior to starting my family law practice, I worked for a law firm in Arkansas which defended family farmers against predatory lending practices by private and federal banking institutions.  In my early days as a Missouri attorney, I worked as a city prosecutor and as a county prosecutor.  My knowledge of immigration law is practically nonexistent.  My only foray into that realm involved getting a divorce for a young woman from Japan who had married an American who abused her.  Her actual immigration lawyer told me that we needed a factual finding of that abuse in order to support her bid for permanent residency.  We got the finding; and she became a permanent resident.

With that framework, I share my thoughts on the immigration situation today.  Take this as what it is:  One woman’s argument in favor of protecting life.

The people who cross our borders in what we call an unlawful manner should receive due process.  “Due process” has always been a loosely defined set of standards.  “What process is due” can vary depending on your situation, and you will be deemed as having received it according to prior precedent and the facts of your case.

But we can define that due process.  Courts and legislatures often do.  The case of Clarence Earl Gideon, Gideon v. Wainwright, stands as a defining moment in the right to counsel.  Prior to the Supreme Court’s decision in that case, criminal defendants did not have a right to counsel even if they could not afford one.  After the decision, they did have that right.  The due process given to them evolved.

We can do that with respect to “illegal immigrants”.  I believe that we should.  In the first case, we value life.  Whether or not you call yourself a “Christian”, “pro-life”, or any other appellation, our society takes strong stands in favor of protecting human existence.    The group of humans coming across our borders have done nothing as a class to deprive them of this imprimatur of worthiness.

In the second case, our nation subscribes to the belief that people are innocent until proven guilty.  The people coming across our borders stand accused, by and large, of one crime:  Immigrating “illegally”.  But there are defenses to that charge.  Some of them might be entitled to asylum.  Some of them might fit within some other exception, which now exists or which we might consider instituting.  Until we know the facts in each case, I believe we should afford these persons the assumption of innocence.  That assumption includes the potential that the alleged accuser can establish an affirmative defense, that is, a defense which claims, “I did what you say I did, but I had a legally cognizable reason for doing so which entitles me to escape punishment”.

In the third instance, I would argue that the offense of crossing into the United States of America without following the legal channels for being allowed to do so is in and of itself a rather harmless “crime”.  In the law, we have a set of offenses described as “malum prohibitum”, which means, something which is unlawful merely because we say it is.  These crimes are distinct from crimes which are “malum in se”, that which is inherently evil and therefore forbidden under the law.  Unless we suspect a particular individual of some offense other than “illegal immigration”, can we not consider the individual to be essentially harmless?  Must we treat the man, woman, or child crossing our borders as equal with a suspected murderer?  I would submit that the two crimes are not the same, and that the latter exceeds the former in severity.

Finally, I consider the pre-trial conditions in which we seclude those coming across our borders.  We put the adults in jail and the children in crudely constructed detention facilities.  This treatment defies my compassionate understanding.  We jail men and women for the alleged offense of wanting the same American dream which we pursue with the state’s blessing?  We tear their children from them, just to prove to the children that their parents should not have entered the country without our permission?

Would we do that to each other?

Would we do that to our own children, our own parents?

For nothing more than the crime of striving to improve the quality of existence for themselves and their families?

None of this makes sense to me.  I don’t much care whether it is being done by the current administration or was done by past administrations.  Focusing on claims that current practices of this ilk stem from the policies of prior presidents begs the question:  Is this how America treats people yearning for its shores?  If it is, then this country has become something that I believe its founders never intended.  If it is not, then we must change the policy, practices, and process of how we treat people crossing our borders.  If necessary to be able to change the policy, practices, and procedures, we must change the laws.  If doing so requires that we legislate morality, then by all means, throw that old saw out the window and openly do so.

Common values exist here.  We share a dedication to “life, liberty, and the pursuit of happiness”.  We need look no further to justify changing how we treat those who cross into our nation even without having secured advance permission to do so.  Let us offer forgiveness to those who have not secured permission.

We cannot say that we hold certain truths to be self-evident, while applying them selectively.  We cannot claim to be the land of the free and the home of the brave while erecting walls to restrict others from entering our country and tearing children from their parents’ arms.  These are not my values, and I do not believe that these are the values of the United States of America. 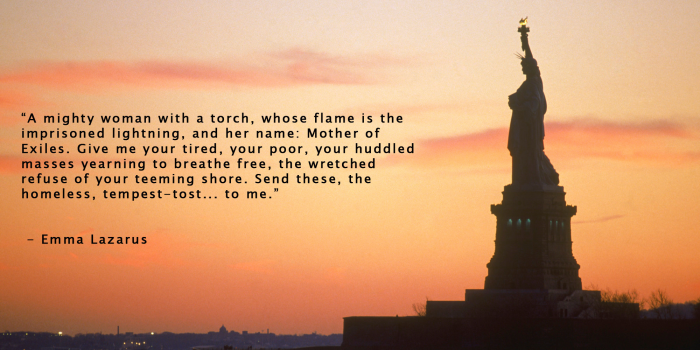 If you enjoy this blog, please tell your friends about it. Thank you.
12
SHARES
ShareTweet

One thought on “It’s Time To Openly Legislate Morality: One woman’s argument in favor of life”