The week slid from depressing to exhilarating to devastating as news of various developments broke.  The kidnapping and abuse of immigrant children gave way to a progressive upset in a New York primary followed quickly by the announced retirement of a Supreme Court justice.  Along the way, my inbox and phone groaned from the weight of all those groups to which I subscribe for notification of desired action.  Petition after petition flashed in front of my eyes.

Yet I keep hearing this voice saying, Resistance is futile.   Compounding my personal anxiety, my one remaining conservative friend tried to claim that the estimate of 2,300 separated immigrant children was fake news or that there would be less harm in separating them than in letting them live in squalor.  She asked for cites to my contrary claims and when I provided same, she responded by telling me that she had been married to a man who always wanted to win so she was quitting the argument.  “You win!” she typed.   I’m afraid she really means “I don’t like your proof that I’m incorrect, so I’ll claim you are a bully.”  I never thought our friendship would decline so far.  The state of political discourse in a deeply divided country sickens me.

I browse the calls-to-action that I’ve gotten.  Tell Mitch McConnell “No justice Until Justice”, by which the writer suggests that Senator McConnell would delay a vote on Trump’s next SCOTUS nominee because I and other liberal or progressive voters demanded that he delay until after the mid-term election. Fat chance.  I delete that request.  Demand the Abolishment of ICE! asks another.  I contemplate that for a moment.  I’m a Democrat-voting DSA member in a skewing Conservative district of a principally blue state.  As soon as I enter my zip code, anyone in charge of immigration enforcement will strike my opinion from their roster.  Again I hit the delete key.

I sit at my computer scrolling through news.  I tell myself that if the conservative voice assumes a solid majority on the Supreme Court, the leanings of the court will parallel the elected majority and who am I to complain?  But another voice whispers in my ear that the changes which the current administration favors will kill the civil rights for which I believe this nation stands.  Freedom from religion; freedom to marry whom you choose; freedom of speech, assembly, dissent, and the press — these rights which we hold as inalienable, not created with but protected by our constitution.  What of them?

What of a woman’s right to choose, so hard won and so dear ?  I understand that people of certain religious convictions believe that abortion is murder.  I even follow their logic:  Life begins at conception, they claim; that life is a ‘human being’; abortion extinguishes that life — kills that human; therefore, abortion is murder and should not be permitted under any circumstances.

Juxtaposed against this view, the opposite side says that the fetus, rather than instantly becoming a human being, remains an organism until some later point, labelled “viability”.  My own difficulty lies in the fluctuating point of viability, which vests earlier and earlier as medicine evolves.  But consider:  Pregnancy places no medical burden on the body of the male parent, only on that of the female.  Why, then, should any man get to say that a woman must “choose” to leave a particular pregnancy intact?   In Roe v. Wade, the Court deployed an analysis which makes sense to me, walking a line between two comparatively extreme positions.

In all of this, through all of this, I remain convinced that a liberal viewpoint greater serves our nation.  It leaves choice alive in every corner.  If you choose religion, you may partake of it, but you may reject it if you do not agree with its provisions.  If you choose to marry someone of the opposite gender, and to disdain on a personal level those who make a contrary choice, your choice stands.  Only when your preferred conduct causes the public  exclusion of, or harm to, a member of a constitutionally protected class will the government intervene.

Hence, you may not discriminate in the public arena on the basis of gender, sexual orientation, age, race, disability, or religion; but you may discriminate on the basis of political view point.  Even the recent wedding cake decision out of the SCOTUS does not change these protections, since its holding, limited to the facts of the case at hand, found that the baker who denied service had not received due process and himself suffered officially engendered religious discrimination.   Indeed, that case lies outside of the norm, and sets no clear precedence endorsing discrimination on the basis of sexual orientation, a question left for another day.

The harshest implications of a conservative shift in government or the courts lead me to resist that trend.  I favor a broadening of rights, not a narrowing.  The liberal view says that we should all be allowed to act; the conservative view seems to say that only certain of us have that right.   True enough:  Analysis of these divergent perspectives cannot possibly be so simple, as study after study has shown.  Greater minds than mine expound upon this dichotomy, examples of which abound.

But for my purposes, the sharp difference of view however articulated or justified, results in a threat to the values which I associate with America.  So, then, to my question:  Should we voice our dissent, even if we anticipate that it will fall on the deaf ears of those currently in control of all three branches of our government?  Can the vociferous articulation of disagreement, consistently and unrelentingly lobbed against the powers which currently be, change their minds?  If not, should we nonetheless continue?

Put another way, if the only virtue in preaching to the choir lies in strengthening its voice,  what value singing?

My instinct to crawl into a shell and ignore the current state of affairs or tow my tiny house to Canada fights against my lifelong dedication to the greater good.  I find myself raising my hand among an often silent crowd, rather than cowering against a fading backdrop.  The constant warnings of Europe’s past alert me to the danger of letting those who would limit the rights of others persist unchallenged.  If I allow society to be unhealthy, can my own demise not be long in coming?

I am “white”, female, disabled, divorced, the mother of one son and no daughters. I have neither grandchildren nor pets. I own no land.  I am 62.  I am a recovering Catholic.  I do not worship at any alter yet I believe in the existence of a divine entity or force of which we all are a part.  I vote Democrat, I recycle, and when I had a “real” house, I flew an American flag beside a Rainbow flag with an “all are welcome” sign in the window.

These are the categories into which I fit.  Yet I allow for the simultaneous existence of those who belong in other categories, provided — and this is crucial — that we all agree to a social compact which orders our co-existence by inclusive behavioral precepts.  Those precepts must restrict behavior as minutely as possible to maintain the integrity of the structure in which we co-exist.

To the end of maintaining an inclusive order in this nation, I must choose to speak.  If I remain silent and the social compact fails to protect any man, woman, or child, then I have failed in my duty as a citizen.  So  I choose to speak, even if my words make no impact other than to keep the chorus alive.   As a person who believes in this grand experiment and in the moral evolution which brought us to our current condition, I cannot remain silent even if no one listens other than my liberal and progressive brothers and sisters.  Put another way, I will protest injustice, even if my protest yields no success other than to let others know that they are not alone.  If we fail, we fail as one.  If we succeed, it will be to the betterment of freedom, which I see as the natural and enviable trajectory of this nation since its inception.

And so:  I raise my voice, even if doing so seems futile.  If I am but one voice, then all the louder will I call.  Resistance is not futile, for the effort is its own reward. 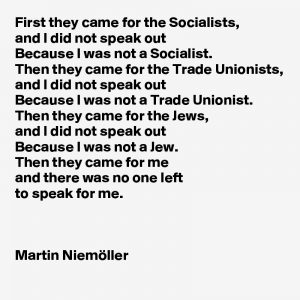