I got into trouble on social media this week for a comment made in one forum with which I had been successful in another.  No one in the forum where I found disfavor knew me.  Everyone in the second forum did.  That spelled the difference between understanding and outrage.

The subject in both forums concerned the young man killed in Dallas by an off-duty police officer.  In specific, both threads discussed the appalling release of information regarding the results of a search warrant on the victim’s apartment.  Those searching found marijuana.  Most of us in each comment line felt that those releasing the fact and results of the search strove to discredit the victim.  I labeled the move “victim-shaming” and condemned it.

In both venues, I mentioned that other classes of victims experience this outrageous tactic.  In this case, the man killed by the off-duty police officer was black.  The officer was white.  But victim-shaming happens with rape victims, domestic violence victims, and even those who have suffered abuse by members of the clergy.  I know:  I fit into each category, and I have represented people in each category.

While I’m not black, or male, I have represented black men who experience stereotyping and I see the pattern.  I also understand the concept of  defense attorneys using this method to elevate the accused to  a scapegoat status or justify the accused’s conduct.  Where the accused is a member of law enforcement, the officer’s employer facilitates manipulation of the official stream of information.  The attempt to discredit those whom the police injure seems more insidious than when a defense attorney undertakes the same effort.  Our government should not disparage those whom its employees maim or kill.

The initial thread on which I commented that women and abuse victims have experienced victim-shaming for decades appeared on the Facebook page of an African-American friend.  She understood my frame of reference.  She knows that I see these common threads as unifying every group that suffers indignation, whether at the hands of government or private forces.  She celebrates diversity but also looks for ways of harmonizing efforts at attaining social justice.  She knows that all survivors start as victims, and all victims benefit from an overall revision of the discriminatory practices and policies of the institutions which govern us and educate us.

The other thread arose in response to a blog by a white Christian minister who embraces the view that white Americans must account for the injustice levied against black Americans.  The narrow subject of the discussion in which I commented centered on the news accounts of finding marijuana in the victim’s apartment.  I made the exact statement that I had made on my friend’s page.   I said that releasing the information seemed like “victim-shaming”, something that victims of sexual assault such as women had also experienced.  (I might have said ‘rape’ rather than ‘sexual assault’.)

Whereas my friend had acknowledged the shared experience, those participating in the Christian blogger’s comment chain blasted me.  Assuming me to be white (my Facebook profile photo at the moment is a photo of my house), the responders castigated me for hijacking the thread and “making  this discussion about ‘you'”, even though I actually did not mention myself at all.  I merely said “rape victims”.  I did not identify myself as such because I was among strangers; I saw no reason to disclose something personal about myself.  To those attacking, I answered in nonviolent language, stating that I was trying to show empathy and to identify the common experiential reference between all victims of abuse, this man and other victims of race-based discrimination included, as well as victims of sexual assault.  But they found my explanation neither persuasive nor relevant.

I wished them well and bowed out of the discussion after the fourth or fifth attack on my character for supposedly caring more about “white women” than black men.  I did not respond, or defend myself.  I understand their anger.  I have no need to justify my attempt to empathize and find common ground, but I recognize that they do not share my views on that score.  They have a right to their opinion, just as I have a right to mine.  Neither their goals (as I understand them) nor mine are less or more valid for the discrepancy.  I did not feel threatened, or maligned, or invalidated.

But I did experience sadness.  The encounter left me a bit nostalgic for an apparently simpler time, when the City in which I lived celebrated  “harmony in a world of difference”.  I acknowledge that my idealism often interferes with my view of the world.  But I truly believe that all humans should be treated equally by all governments and all other humans.  Regardless of ‘race’; regardless of religious affiliation or practice; regardless of gender; regardless of origin, age, or any other status;  each human should be treated the same.

My particular method for promoting equality involves celebrating both diversity and convergence.  My friend on whose thread I made the comment understands this.  She also knows my frame of reference.  She knows many of my life experiences.  She understands  my family background.  She knows much about what I have done as well as what I have suffered.  She accepts that the ways in which she and I differ do not isolate us from each other.

Victim-shaming succeeds in large-part because those observing the process can feel superior to the victim.  “I would never be killed by an off-duty cop because I don’t have marijuana in my apartment,” the reader is meant to think.  Moreover, victim-shaming detracts from the responsibility of the perpetrator.  In this case, the off-duty cop could possibly have invaded the murdered man’s apartment on an official basis because of the presence of an unlawful substance.  Hence, the thin veil of justification and reasonableness can be enhanced by the victim-shaming, however subtly portrayed.

The exact same process has been used by defense attorneys to persuade juries to acquit rapists.  “She’s a slut, therefore, she deserves to be raped; and you’re not a slut, so you have nothing to fear from my client.”  In my case, I filed an official complaint against the Catholic priest of whom I became a victim as a young teenager.  He tried to say that I seduced him.  In his mind, if I had, that would have justified his admitted conduct.  Never mind that I was a fourteen-year old innocent and one of his students.

The committee which reviewed my claim and later, my opposition to his early release from exile, tried to employ the same victim-shaming.  But I did not tolerate the tactic, and blasted both sets of reviewers.  However, another person, not alert to the strategy, might have cringed and cowered.

My sorrow at the anger which I experienced on social media stems from my belief that injustice levied against one impacts everyone; and the associated belief that we must combat all injustice to combat any injustice.  Victim-shaming cannot be tolerated, whether the victims is a black man killed by an off-duty white police officer; the Sikh in his turban  pummeled by passers-by for speaking a foreign language; or the woman pulled behind a dumpster and repeatedly assaulted by a college student.   None of those victims should be shamed, and by calling victim-shaming the insidious tool of heinous actors, we protect all of us.

I recognize that I did not suffer racial indignation, oppression, and enslavement.  But as a woman, I have been part of the same type of discriminatory process which those who combat racial injustice protest.  I see nothing to be gained by emphasizing our differences without also using our common experiences to our mutual benefit.  I fear, though, that the quest to celebrate diversity does not allow for harmony.  I pray that I am wrong.  I persist in my hope that we can accomplish more together; that there is strength in unity; and that when we better life for one, we better life for all.

So let me be clear:  the practice of shaming victims to justify abuse, murder, oppression, and disparagement cannot be tolerated.  The color, gender, religion, or other status of the victim cannot and must not be used to justify victim-shaming, nor can it or should it be used as an excuse for crime.  We must fight against this insidious practice, just as we must fight against racial discrimination, domestic violence, and religious intolerance.  We must promote harmony in a world of difference, but we may not tolerate any disharmony on the basis of our differences regardless of where they lie or how they define us.

All humans are created equal.  No government, nor any individual, should use the distinctions between us to justify the abuse of any of us.  All of us should protest such abuse — loudly, clearly, and relentlessly, until all discrimination ends.  Only then can we rest, and not a moment sooner. 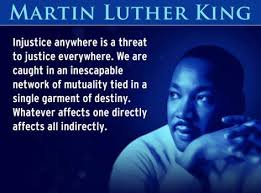