As a licensed Missouri attorney with 35 years of practice on my resume, I consider the appointment of Brett Kavanaugh to the Supreme Court to be a devastating blow to the future of American Justice.  His temperament and proclivity for evasive responses demonstrate his unsuitability for that office.  The positions he has taken on presidential power and his accusations of conspiracy mar his potential effectiveness.  The manner in which he behaves will detract from the credibility of the Court. Moreover, as a survivor of the type of sexual assault of which he stood accused, and the child of an alcoholic, I see his past conduct as creating indelible stains on the fabric of his life which should have disqualified him.

I am not alone in my beliefs, but others disagree. I never doubted his future confirmation.  I thought the road might be rockier but only once did I falter in  my pessimistic air.  On the morning that I read of the Jesuits and the ABA withdrawing their support, I saw a glimmer of hope.  But that hope never rose to enthusiasm and soon died.

I don’t think the American people really care about the Supreme Court, but passion runs high on the issues which it has decided.  Civil rights, the scope and applicability of immigration policies, and abortion fall in the overlap of the American consciousness with its lack of concern.  Only we lawyers and issue-centric activists feel strongly about the make-up of the bench, because we understand the power and import of its rulings.  In a few years, as cases meander up the federal food chain, the nation itself will begin to feel the impact of this infamous decision.  Some will groan. Others will chortle.  All will see what we see now:  The monumental impact of this change.

Kavanaugh’s appointment  drew more fervor than it might have because of the public nature of the hearings into his character prompted by the courage of Dr. Blasey Ford, his principal accuser.  Because of her, throngs of sexual assault victims and their advocates marched on the offices of Kavanaugh’s supporters.  Trump and McConnell claim that “mob rule” backfired and assured his appointment, but that ploy smacks of victim-shaming in the extreme.  McConnell would have gotten Kavanaugh appointed in any event.  Had he been voted down, a period of waiting would have preceded a renomination.  Kavanaugh would be seated.

The passion roused by his nomination and the disclosures made about him will bloom on both sides. Advocates of protecting survivors will not stop protesting.  Conservatives will agitate each other to fight the rise of what they characterize as the leftist mob.  The divide in this great nation will deepen until it threats to crack and shatter the country which I love.

There lies the greatest shame.  Our nation has been even more deeply marred.  Rather than simply advancing a conservative agenda, this administration put forth a candidate whose appointment would accentuate the differences on each side of the political aisle.  Remember:  Divided we fall; United we stand.  Trump cannot let the country heal because he cannot conquer its beautiful shores if its people stand as one.

I look at the ruination which Trump has made of the progress in America in the two years of his administration and I weep.  I never cared if he cheated on his former wife with his current one, or his current wife with an actress.  I didn’t mind that I have seen photographs of the First Lady without clothing.  What they did in their marriage,  how they earned a living, has nothing to do with the potential of their effective service to this nation.

Unless those efforts exemplify their character and drive, in which case, their marital infidelity and proclivity for certain conduct suggests the danger which they bring to America.

And that is why I consider Saturday, 06 October 2018, to be a day which will live in infamy.  On that day, a president without regard for women seated a justice without regard for women on the bench of the highest court in the nation.  Trump treats the oval office and its associated power like a tool for advancing his interests.  Packing the Supreme Court with men of similar caliber to himself serves Trump’s interests.  He could have chosen a conservative justice who would bring a thoughtful, intelligent, honorable demeanor to the bench. Instead, he nominated, and got confirmed, a man who likes beer and who made his name in high school, college, and law school as a bully.

Just like Trump, who bragged well into his adult life about grabbing women by the pussy.

After Kavanaugh’s confirmation, I joked on Twitter about responding to judges’ questioning of me during oral argument by yelling at them, which I would defend by citing “Kavanaugh rules”.  But I would not really do that, because I was taught to behave without the appearance of impropriety, a code which neither Trump nor Kavanaugh seem to revere.    The other differences between us more starkly and surely impact all of society, because they now wield unlimited power, and I have only one small vote and a tiny platform on which to raise my voice against the infamy to which our country has been subjected.

But I will raise it.  I will not be silenced.  And if there is a list being made of those who oppose Trump, please spell  my name right when you add me to that list.  I will be honored to be included among great American heroes who protested the ruination of our land and the demise of this once-great experiment.

Like Christine Blasey Ford, I consider speaking out to be my civic duty, and I will not be silenced. 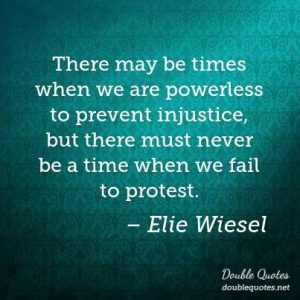 If you enjoy this blog, please tell your friends about it. Thank you.
11
SHARES
ShareTweet