For the last decade, I have struggled to force myself to get used to cataclysmic change every twenty-four months or so.

My son left for college and my second husband decamped from my life at nearly the same time, the summer of 2009.  I met my third husband that year also.  I went from assuming that I would eventually move to New Hampshire and live free or die, to figuring out what to wear to a Republican cocktail party.  I morphed from a mid-life orphan to the beloved daughter-in-law of two elderly Johnson County, Kansas suburbanites.

That incarnation lasted four years, at which time I experienced a huge upheaval followed by a divorce.  The experience of representing many others in their own evolutionary moments should have prepared me but I handled the tumult with a breathtaking gracelessness.

I didn’t stand idle long.  I tore myself from the town in which I had raised my son; the house that I had so loved; and the cozy klatch of friends with whom I had surrounded myself.  I took to the road with a cedar house on wheels and parked myself in the California Delta.  After three decades as a solo practitioner, I relinquished the reins and became a contract worker.  My world narrowed to 199 square feet and ten miles.  For recreation, I started driving to the Pacific coast and exploring the fog at dawn.

In November of 2016, we all feared that bigotry would become the new normal.  We were only partly mistaken.  We had no idea that 2020 would bring something more shattering: A pandemic, badly handled by the federal government with its seemingly incompetent leader.  Though some predicted that Trump’s lack of empathy, foresight, and experience would cause disaster, only a prescient few truly understood the enormity of the potential for failure.

So here we are.  My personal background of periodic swings from one reality to another gave only a microcosmic foreshadowing of the chaotic  daily life which I now share with 40,000,000 fellow Californians, 330,000,000 people in the U.S., and 7.5 billion humans on Earth.  We gape at stunned announcers intoning the death toll from this insidious virus.  We stand in grocery stores torn between chagrin at purchase limits and gratitude that anything remains for us to buy.  Today I felt a little thrill that the one grocery store in my small town had eggs, a sensation enhanced by the discovery that they had finally gotten my preferred brand.  My second thought:  Who cares what brand?  EGGS!  The last time I checked, the entire display had been stripped bare.

I tuck a mask in my handbag before I leave the house.  I’m still working because the firm with which I contract has been deemed essential.  But we don’t let clients or tradespeople into the building.  The letter carrier rapped on the glass during my last shift, displaying a parcel that wouldn’t fit through the slot.  I unlocked the door and took it between two fingers. I offered him some water.  He smiled, shook his head, and retreated.

My community halted its weekly dinners and bolted the clubhouse.  The restaurants in town have closed.  Neighbors walk the meadow and wave, but only the few and the foolish venture close.  I stood on the bridge over the creek and talked with the woman who lives on the other side.  Normally we would embrace.  We kept our distance.

I listen to the governor’s daily press briefings.  I hear the fatigue in his voice.  I try to focus on the president’s babbling but my stomach knots.  His gross incompetence terrifies me.  I click the corner of the browser window and make his madness disappear.

I cling to rational discourse.  When Trevor Noah interviews anyone intelligent, I play the clip over and over. I post them on social media.  His conversation with Bill Gates encourages me beyond reason.  Actors and musicians lend their voices and talents to charity.  I would not normally care but now, in these times, their generosity touches me.  Jon Bon Jovi talks about washing dishes in his soup kitchen.   Guy Fieri lends his name to a relief effort for suddenly unemployed restaurant workers.  Singers hold live concerts to raise money for their fans in need.

I hear a politician or a personality attribute our collective  virtuous response to some inner grit which Americans share.  That could be true.  Given enough time and enough space, the best in anyone can rise.  When the house burns, when the thunder rolls, when the wind ravages the land — the noble grab their shovels and waders and forge ahead.  Perhaps we all have enough of that nobility to enfold a nation and carry everyone to safety.

My son has shown me that the system which has taken hold in this nation does not serve its people.  I cannot say that I would advocate a revolution.  But I see no reason to return to whatever drove our country before the virus came.  If we do, only the richest will survive.  Those of us in the middle class, those of us who live in poverty, cannot sustain ourselves in the face of this onslaught.  It takes a village.  The wealthy and powerful must be fully vested in the salvation of the whole.   Ego cannot govern.   Self-interest must yield to the common cause.

If my certainty about the impact of the new normal means that I have become a socialist, then so be it.  Call it what you will, but we have reached a juncture at which one road leads to doom and the other to dawn.   Our passage has been booked.  We hold one-way tickets.   We must choose.   It’s all or nothing, and eternity waits for our decision. 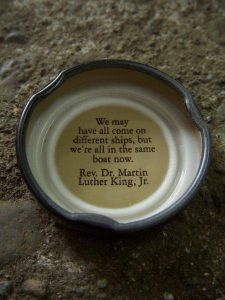