Words have eluded me this week.  I have sat for hours in front of live news broadcasts, first from Minneapolis and then from other US cities.  The killing of George Floyd; the angry protests; and the destruction clutched at my heart but  I felt disconnected.  I felt unworthy to comment.  Anything which I might say comes from a detached perspective, passion once removed.   As a white woman, I do not know the anguish of being abused, shamed, and hunted because of my skin color.  I have black relatives, and black friends, but mine is not their story.  I asked myself, what right do I have to comment?  On what basis would I protest?  How feeble would my apologies sound?

But I find myself unable to remain silent.  George Floyd should not be dead.  Ahmaud Aubrey should not be dead.  Eric Garner should not be dead.   The list spans two centuries.  Emmett Till.  Nine good folks in Charleston.  Addie Mae Collins, Cynthia Wesley, Carole Robertson; Carol Denise McNair.  The anguish mounts in my chest as I type each name.  I could fill the page with their sacred names; with links to their stories; with outrage at the savagery which claimed each of them.

My social media fills with competing threads.  The few conservative voices left among my contacts lament the rioting and its aftermath, including several deadly incidents.  I do not disagree with their condemnation of the looting, arson, and destruction.  I do not blame every law enforcement officer for the acts of the men who killed George Floyd, or Eric Garner.  I yearn to restore order.  I wish the deaths which have occurred during the riots this week could be retracted.  They cannot, any more than life can be breathed back into George Floyd.

From the Federal officer in Oakland to the two people shot and killed in Indianapolis,  the tragedies which we witnessed this week flow from one ugly cause:  Racism.   We’ve seen enough video to understand that people with criminal inclinations have taken advantage of the turmoil.  Much of the looting seems to have been in that vein.   Such disgusting opportunism and its devastating impact should be halted and the perpetrators punished.  But make no mistake:  Those who took advantage of the climate of chaos must not distract us from the larger goal:  Finally, and irreversibly, ending the unequal treatment of black Americans by our society and its designated vanguards.

Trevor Noah delivered the most powerful summation of these times.  Everything which happens in the world is connected in some shape or form,  he tells us.  Ahmaud Arbery, George Floyd, Christian Cooper.  He calls out the smugness displayed by Amy Cooper, who knew how to use Christian Cooper’s blackness against him.  He minces no words, nor should he.  As the New York Times observed,  a rising inability to suppress the deeper impulse toward racist conduct continues to permeate daily life in America.  My feelings of helplessness flow from such inescapable and awful truths.  What can I do, as a sixty-four-year old woman in the waning years of her life, with my crippled body and my weak voice?

I do not know.

I keep watching the news.  Here and there, a glimmer of glory shines through the billowing clouds of despair.  Volunteers emerge from the morass, armed with shovels, brooms, and wheelbarrows to begin the sad process of cleaning their community.  In Louisville, black men formed a human chain to shield a police officer who had gotten separated from his cohorts.  I play the news on every website, searching for other stories of empathy and compassion.

In my past lives, I have picketed, protested, and pontificated.  I have marched.  I have raised money.  While I have not been a part of the civil rights movement on behalf of black America, I have fought for fairness in other arenas — on behalf of abuse victims, mostly; but also to increase the safety of women and girls;  fund services to the forgotten in America; and to provide equal access for disabled people.  Now  I face the sickening thought that my energy could have been misspent.  There is just so much injustice in our country.

What can I do now, to root out the choking weed of racism?   I fade into the woodwork of late middle-age, a time of ineffectual floundering as I succumb to the worry of work undone.

Desmond Tutu said, “Little bits of good together can overwhelm the world.”   I might be left with nothing more than my kindness, small acts cast upon the pool of humanity to send ripples across the still waters.    I watch and wait for any chance.  I gather all the broken bits of charity into my heart.  I dole them out, one by one.  I make a lantern out of them, which I hold aloft amid the hurricane winds.  I stand, one single voice in a quiet, growing chorus which rises from the rubble and the dying embers. 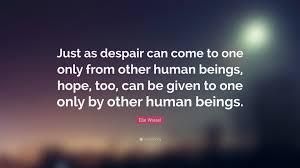