The death of Ruth Bader Ginsburg stunned me.

I have not been an RBG groupie.  In fact, I considered her to be like the illumination from an overhead light — always there when I needed it, quietly unobtrusive as I went about my day elsewhere.  I didn’t scour her briefs and opinions, but I understood her impact.

My law school class (UMKC School of Law 1983) had a nice balance of genders.  Marcia Baldwin led the class; we never doubted that she would get all the honors.  Her gender didn’t seem to make a difference to us.  I graduated with distinction but only barely; my gender didn’t inhibit my achievements.  I did that for myself, not quite diligent, a semester in the hospital after an accident, a bit too much Scotch on the weekends.

People like Justice Ginsburg and my old classmate Marcia Baldwin had the drive and fire to attain their goals and the purity of heart to choose broader objectives which served humanity.   I lost track of Marcia; but of the notorious RBG, I heard plenty over the last four decades.  Because of Justice Ginsburg, women have attained a measure of equal treatment that we might otherwise still be longing to share.  I assume that equality in my daily life; perhaps we all do.  Though vestiges of gender discrimination tenaciously cling to the fabric of our society, their foothold finds slippery perch because of Ruth Bader Ginsburg.

Twenty years my senior, RBG forged a path that I carelessly trod behind her.  Now I read the adoring words of other female lawyers, and I cringe at my thoughtlessness.  I realize that I took RBG for granted, as I take the lamp for granted, and running water, and the gentle nod of the tired lady on the other side of the cash register.  I studied her cases in law school, fresh off the press but clearly significant even then. Cases in  which she argued for equal gender treatment in jury selection and federal benefits established Bader Ginsburg’s bona fides before she assumed the bench.

She continued her thoughtful and powerful trailblazing as a judge and then a Supreme Court justice.  From the bench, she considered and commented upon injustice after injustice, voting to bring the United States infinitely closer to a structure which embodied the ideals upon which this country purported to be founded.

She fought her  own battles with equal vigor.  Personal tragedy and loss; debilitating illness; her husband’s death; Bader Ginsburg bore these travails with courage, perseverance, and grace.

I will not spare much room for the travesty which would flow from her hasty replacement, with or without the political malaise at work in Washington.  My French friend Louis asked me yesterday, How can such a big and great nation go so far backward?  I had no answer for him.  With the loss of this magnificent warrior for justice and equality, I fear that we will quickly and irretrievably recede from the previous progress which we have so painfully garnered.

I confess that I have taken the legacy of Ruth Bader Ginsburg very much for granted.  But I have awakened to the glory of the shining star.  I shall not forget.   I can never be great; I do not have time to accomplish anything like what her 87 years have given the world.  But I can be part of the revolution which her work inspires.  I can vote.  I can donate.  I can write.  I can join my voice to those who sing in her honor.  I owe her that much; it is a debt that I am not loathe to keep paying, until my own dying day. 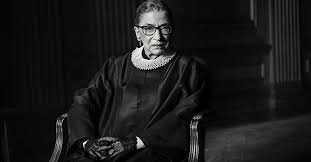