I can never understand the experience of being black in the United States of America.  However, I can and do accept that discrimination and abuse levied on generations of people in this nation created a climate which perpetuates profound disadvantage.    I do not have to be the victim of this atrocity to recognize its truth.

But the centuries of mistreatment of black, indigenous, and other people of color in this nation  did more than just economically cripple an entire segment of society.  In every corner of this country, tacit tolerance of discriminatory treatment of people based on their race or ethnic identity invites injury.  Because society repeatedly excuses killing, assault, and disparagement, safe zones arise.   Police departments shirk their sworn duty to protect those whom they serve and instead shelter each other from exposure.

When Derek Chauvin killed George Floyd, he and his associates immediately began spinning an alternate narrative.  By their immediate words and actions, they sought to raise the illusion that yet another uncontrollable black drug addict died from too much of what he had done, rather than too much of what they felt free to do.  From the hurried release of the Minneapolis police department’s first statement to the tale which Chauvin’s lawyer would eventually spin for the jury, the small cadre of Chauvin and the other officers present that day strained to blame George Floyd for his own murder.

That house of cards worked on so many occasions.  I can only assume that Chauvin must be overwhelmed with disbelief that the traditional blue wall of silence did not protect him as it has protected so many others.

And why?  Why did Chauvin’s trial result in a guilty verdict when so many others have gone free?

Because of one brave woman who faced and dared their wrath.  Darnella Frazier, still a teenager at the time that she held her cell phone towards the awful sight of a man who could have been her father or her brother under the knee of a police officer.  Without Ms. Frazier’s courage, we might have suspected the truth but Chauvin would likely have succeeded in hiding the shameful truth of what he did.

Darnella Frazier kept her eyes opened, and because of her, the eyes of the world focused on Minneapolis today.

I do not think the statements of Maxine Waters or Joe Biden made any impact on the verdict in that Minnesota courtroom.  The prosecution rested its case last week.   The jury listened to what little evidence the defense submitted, but in truth, that evidence consisted of barely disguised supposition and excuse.  The jury had already seen the  only evidence which really mattered:  Nine minutes and twenty-nine seconds during which an emotionless uniformed officer with his hands in his  pockets pressed the life from an unarmed, handcuffed, prone black man crying for his mother.

If the world keeps its eyes trained on the United States of America, we might have a chance for genuine change.  If the nation keeps its eyes on those in power, the tiny crack of today’s verdict could be pried wide enough to shatter the system.

Sadly, even if this first verdict starts a domino effect which results in genuine reform, George Floyd cannot receive justice.  Nor can his daughter or his brothers.    Even if the City of Minneapolis opens its coffers, George Floyd will not be resurrected.  Make no mistake:  This is not justice.  We have merely seen a murderer called by his true name.

But still:  This jury has set us on a path that we can reject or choose.  We can announce that we will no longer tolerate the rank abuse of power by law enforcement; the economic degradation of more than half of our citizens; or the  appalling practice of allocating privilege based on skin color.  We hold the light which can drive away the generations of shadow.  All eyes are watching us, especially those of our children.  Let us not disappoint them.  Let us hold high the Lady’s torch, and cast the light of Liberty in every corner of our nation. 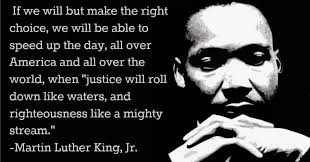