My political voice fell silent for the last eight months.  I resigned myself to occasional posts on social media.  I shared the writings of more famous persons.  I watched news reels in ten- or twenty-minute segments, after a long day at work.  Gradually, happier subjects drew my attention.

But the renewed commentary awakens my outrage.  Truth told, in the last year, I have lost four friends over our differing values.  They would say that I chose “politics” over them.  They do not understand.  I saw what they supported, the deep digression from my own standards.  I knew that anyone who could continue to praise the conduct which tore at the fabric of our democracy did not share my views.  The staggering contrast between what I find acceptable and what they tolerate could no longer sustain a relationship.

I mourn the loss of the relationships which I thought that I had.  However, I accept the flimsy illusion of closeness that must have hidden our immutable differences.  Democracy lies at the very core of my social and political identity.  The four people who cast me aside — or who claim that I pushed them away — turned blind eyes to the preaching of their leader, a man who incited a riot by which our Republic came under dire and continuing threat.     To support such a politician defies claims of patriotism.

I started my political life in my teens.  I joined the American Freedom From Hunger Foundation and aided the cause of raising funds for impoverished communities in rural parts of our nation.  I never looked back.  Cause after cause drew me; and always, my efforts aimed to improve the social fabric of this country so that it provided for everyone.  Call me a Pollyanna, but I believed in the American Dream and in its availability to everyone who came upon our shores.

So much about this country touches my heart.  Its people and their goodness stand chief among its virtues.   Anywhere I walk, any street upon which I trod, will bring me to a restaurant, a store, a museum, a bar, a field, a school, a bus stop where a hand will reach out to steady me.  When crisis strikes, someone grabs a microphone and implores our collective effort in uniquely American tones.

But America has her seamier side, mostly in the backhalls of Congress and the once-smoky boardrooms of its corporate conglomerates.  In the virtual world, too, messages of greed flow.   Sadly, most of us have no idea who really runs this place, the nation which many of us hold dear.  Still, I for one believe in its ideals, and in the people who manifest the best part of this great experiment.

On 06 January 2021, I sat at a computer in my place of employment.   An alert on my cell phone told me that news had broken.  I opened a web browser and sat in stunned silence, just as I did on 9/11, just as I did when the tornado hit Joplin and the hurricane barreled down Bourbon Street.  As the woman for whom I work ushered clients out, I stood in the hallway, gesturing, You must come see.  They’ve overtaken the Capitol.  We stared at the live coverage together.  We could not believe what we saw.

As time has passed, I’ve watched America split into two public persona.  One half condemns the attack on Congress and the building which houses the mechanism of our Democracy.  The other side barely and rarely mentions it, choosing instead to urge us to continue our daily existence, and to forget that horrendous event.

But we cannot, and should not, ever forget.

Sixty state and federal judges, respected officials of both major parties, and elected state officers across the country confirmed that Joseph Biden won the presidential election, securing the popular vote and the majority of the electoral college.  Yet to this very day, the losing candidate insists that he actually won, and praises those who stormed Congress in an effort to block the certification of the free and fair election.  With not one shred of evidence, the losing candidate gathers his party to his chest and bleats, over and over, that he, and not Joe Biden, should occupy the White House.  He will stop at nothing, which we know, because he made not one move to stop his mob in 187 minutes.  Instead he seemingly stared at a television, by all accounts pleased at the riot which bellowed his name.  All the while, people beat, broke, and battered their way into a sacred building, trampling stalwart defenders of Democracy who will forever bear the scars of that awful event.

Until 06 January 2021, many people believed that we stood far above authoritarianism and fascism.  “It can’t happen here,” we boldly asserted.   We felt immune.

But that day slammed us with the knowledge that it can, and it nearly did, and it might yet.  The January 06th mob nearly succeeded.  But for a few dozen amazingly brave officers, quick-witted pages and House employees, the peaceful transfer of power would have failed.

If ever we had the luxury of casual regard for our Democracy, that moment in our collective history has faded into the abyss of time.  Make no mistake about my sentiment.  The policies and practices of our governments, from local to national, have failed many of our people.  The need for reform cannot be ignored.  But that message will be told another today.

Today I stand on crippled legs, and raise my spindly spastic arms to plea for our nation.  We must not let the fascists overtake our Republic.  They claim to be freedom-loving patriots, but they want freedom only for themselves and those who look like the mirror’s image.  They avail themselves of the opportunities of America but would deny those opportunities to many.  They do not understand the intersection of social and personal compromise; the balancing act between freedom and safety; and the daunting but noble objectives upon which our country was founded.  A nation of the people, by the people, and for the people cannot submit to the narrow, bigoted ruling of a small fraction no matter how wealthy.

Tellingly, the supporters of the failed, twice-impeached, single-term former president always groan and whine about their rights without acknowledging the rights of groups whom they disparage.  Those supporters also either fail to see or choose to ignore the intricate balancing act between individual freedom and the greater good.   They refuse to acknowledge the untruths upon which their cause relies; and the twisted purpose to which they give themselves in service to those untruths.

When the ability of all to vote leads to the failure of their chosen candidate, they set about to deprive any opposition of meaningful access to the ballot box.

When they stand in the majority they proclaim their superiority.  The dilution of their majority leads to their cry of victimhood.

I watched Merrick Garland, the Attorney General of the United States of America, speak today.  I wanted to feel hopeful.    He seemed sincere.  He seemed measured, intelligent, and earnest.  He offered a quiet dedication.  He pledged accountability.  He vowed to seek justice.   My head bowed.  I felt like weeping, that we should come to such measures.

I know many young and passionate people who work for the betterment of a system which they perceive as failing the neediest among us.  I applaud them.  Nothing I say should be taken as unqualified endorsement of any action by our federal government.  I question both major parties.  The inability of our government to serve its people frustrates me.  The intolerance of immigrants, the erosion of reproductive rights, the staggering cost of medical care, and the failure of our government to provide the most basic of needs for those whom it serves saddens me.

But none of these problems should be used as an excuse for the likes of the January 06th storm.  Indeed, that angry mob did not protest any failure of government to serve its people.  They merely and grossly protested the lawful certification of a new president in place of the one which they had wanted.  Such conduct cannot be tolerated.   If we allow those who organized, funded, condoned, instigated, encouraged, and committed the January 06th attack to go unpunished, we will lose the Republic which most of us hold dear.

It can happen here. 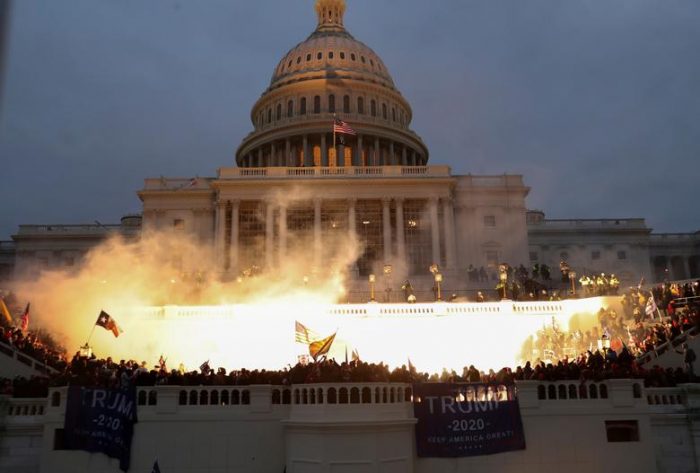 An explosion caused by a police munition at the Capitol Building, January 6. Thousands of Trump supporters stormed the seat of Congress last Wednesday, forcing lawmakers who were certifying Democratic President-elect Joe Biden’s election victory into hiding in a harrowing assault on the heart of American democracy that left five dead. REUTERS/Leah Millis