I understand the concept of celebrating the passage of the Americans With Disabilities Act.  Quite frankly, though, I don’t want to be associated with something known as “disabilities pride month”.

I’ve “had a disability” since before the word became vogue and sparked an industry.  I became critically ill at eighteen months, and when I got through the torture of 1950s medicine, I had a “walking problem”.  My mother coined that term.  For the next couple of decades, I bounced from orthopedic doctors to neurologists to physical therapists.  None of them knew what to make of me.  They predicted all kinds of dire outcomes, none of which has yet come to  pass.

Doctors shrugged and gave me Valium, Darvon, Lithium and Librium, Depakote, Baclofen, Flexeril, and a bunch of other things that I can’t recall.  I spent my twenties, thirties, and forties building a solid dependency on prescription painkillers.  To be honest, they did not relieve the pain. I could still feel it, but I no longer cared — about the pain, and, increasingly, about anything.  Nearly ten years ago, I made an appointment with my primary physician and begged him to take me off the stuff.  I took my last Percoset on 31 December 2013.

Through grade school, high school, college, and even law school, I fended off varying levels of what folks now consider bullying.  Boys followed me down the street imitating my walk.  Girls whispered and pointed.  Young men bluntly asked if I could have sex.  Others honestly rejected any notion that they might consider intimacy.  The curious asked questions.  The impolite made suggestions.  Mothers pulled their children away from me and smirked.

The physical barriers which confound me have not been greatly alleviated by the regulations flowing from the ADA.  Most of the biggest concessions made by public facilities benefit people in wheelchairs, especially if they have an attendant or drive a powerchair.  Others help the sight impaired, like the little inverted cups which signal a crossing or danger, but pose a tripping hazard for me.  Parking spaces by curb cuts only help if the access can be next to my driver’s door and the spaces are situated by the entrance of the building.  Accessible hotel rooms need to be near the lobby or elevator, and often are at the end of the hallway.

Please do not mistake my intention.  Any modification which makes a building or facility easier for any disabled person to use should absolutely be required.  However, as an ambulatory person with spastic legs, weak lungs, asthma, and unrelenting fatigue, most of those accommodations do not help me.

I recently went for a blood draw at a Stanford facility.  I parked in the patient garage in one of the available handicapped spaces.  I grabbed my sturdy stick because the distance to the elevator surpassed what I currently can independently navigate.  I saw no sign telling me the floor for the lab (there were no signs whatsoever) so I got out on the first level and approached a guard.

I asked the location of the laboratory.  He told me to go out the front door and walk to the next entrance.  I asked if I had used the wrong elevator.  He assured me that I had not.  He repeated his instructions multiple times.  He showed me a wall map.  I asked how far it was.  He opined that it was “not too far”.  I asked if there was an entrance at which I could park that put me in the correct building.  He shook his head and repeated the directions to the lab, assuring me again that it was “not far”.

After about fifteen minutes, the guard moved his body to within six inches of mine and said, “Lady, I’m trying to tell you where it is.  Go out the door, walk down the street, go in the next door.  Okay?”  He thrust his face almost to a point of touching mine.  I asked him to step back.  Then he got closer and said, “I’m going to get you a wheelchair and I’m going to take you there myself.”

Two things were crystal clear to me:  I had no desire to use a wheelchair after spending sixty-six years staying vertical; and, perhaps more importantly, I would never, under any circumstances, allow this man to push any wheelchair that I did use.  I told him that I did not want a wheelchair and I started toward the door.  He came even closer to me, muttering over and over that he was trying to help me.  I told him to leave me alone.  He said he was going to escort me next door.  I told him to go away.  He said he was not leaving and that he would walk with me.  I told him that if he did not leave me alone, I would call the police.

He followed me all the way over to the building.  I have never felt quite so vulnerable in all my years of having “a walking problem” and being a relatively small, relatively weak person who spends most of her time alone.

I feel no pride in being disabled.  I feel no pride in having to bludgeon the world to begrudgingly yield its contours to admit me.  In fact, most of the time I am tired, sad, and angry that in 2022, it is even necessary to mention the injustice of barriers.  To paraphrase a reaction which I read online to the newest legislative proposals attempting to preserve marriage equality, the fact that you have to vote on whether or not I get equal access to the grocery store infuriates me.

So please excuse me for not displaying whatever color you’ve assigned to disability pride month.  I’m over it.  I’ve abandoned the hope that I will ever be able to get around with the ease of the able-bodied.  I’m taking my stick in hand, and I’m going to consider using it to whack the next person who suggests that I’d be better off in a wheelchair.    That patently absurd and false assertion insults me and, even more, insults people whose medical conditions require dependence on wheels.  They face as many difficulties as I do, just different kinds.  Don’t try to justify the clumsy and feeble attempts that you make to level the playing field.  Fix it, or get out of my way and let me figure it out on my own. 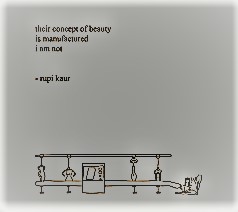